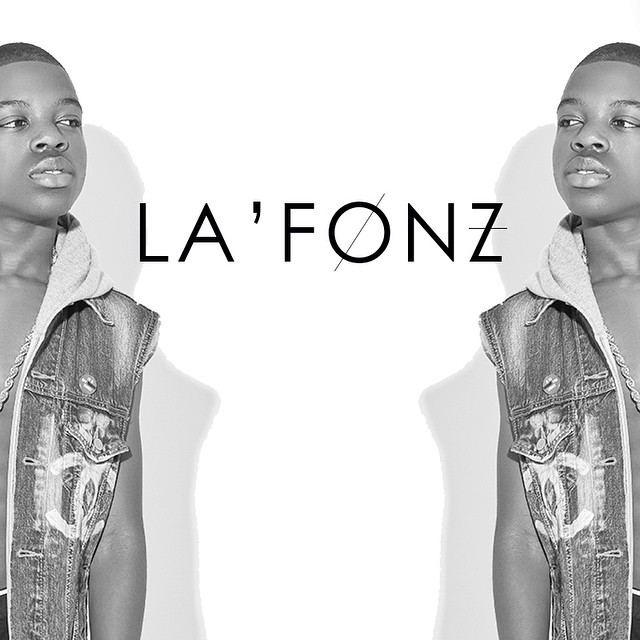 Representing the notorious Inglewood, CA, the young man La’Fonz stands apart from his peers with his swagger and gentleman charm. While being a “good guy” may not be what Inglewood is known for, La’Fonz is proving that young men do not have to only be a negative product of their environment, they can grasp hold and highlight the positivity.

Starting at a very young age, La’Fonz knew he wanted to be an entertainer. While his dad owned a recording studio, La’Fonz would often interact with all of the talent that came by and he would put on a show. La’Fonz made his first debut at the age of 7 when he recorded a radio drop for The Beat with RegalCityEnt. recording group O.N.E (Eric Bellinger, Guy James, Justin Hunt and Brandon Lucas.) A couple years after that, La’Fonz made a special appearance on O.N.E’s highly regarded mixtape, Jerk N B: Not Made For TV on the track called “Kicks So Clean.” From that moment, he made it clear to his dad that this is what he wanted to do.

The music industry has yet to discover such natural talent, charisma, and swagger that radiates from an artist in this new millenial time. La’Fonz was blessed with the ability to provide an everlasting show for all guests who attend. His goal is to have everyone leaving a show wishing there was more to come. Like with all situations, La’Fonz had to earn his way to the front of the stage by proving his abilities. After much convincing to his youthful audience and peers, La’Fonz gained respect as an artist & the attention of Promoters. He then headlined a few school tours, after promos, and performing with artists such as Missy Elliot, Cassey Veggies, Mann, Mindless Bhavior, Zendaya, LMFAO, recording artists New Boyz & many others.

La’Fonz released his introductory mixtape “Late4Class” in April 2013 which was just the beginning of his official debut. From this project, La’Fonz dropped a few videos and did a lengthy, productive promotional run. After the success of his first album, La’Fonz released single streetbangers like “Swag” and “Can’t Tell Me Nothin.'”

Now that he is older and an upperclassman in high school, La’Fonz is displaying his maturity level with his more sophisticated and risqué  content. He’s still shows no sign of disrespect towards others, but his vibe and energy competes with all the mainstream records. An example of his newly found sound is in his newly released singles “Supposed To” and “The One.”

Under the guidance and with Artist Development from Mr. Fonzel Harris, La’Fonz has become a force to be reckoned with and is quickly becoming a household name. There are great things coming in the future for this young talent, so get aboard now and join in on the journey.

To stay informed on all La’Fonz news & updates follow him on all Social Media @Lafonz712 also look out for La’Fonz EP coming soon!!!